I have been contacted by William Morrison, grandson of Dick Ball who played string bass with several dancebands including Bert Ambrose, and participated in some of the hottest jazz recorded by British musicians in the 1930's. After some exchange of information I offered to create a webpage as a tribute to Dick Ball. I am especially grateful for the personal photographs that form part of this tribute.

Son of a fireman, Dick Ball was born in Southwark Fire Station 26th Dec 1902, 2nd eldest of 14 children. He attended Naval School but was discharged as unfit and chose to make a life in music, playing tuba, sousaphone and latterly string bass. Dick's early music career saw him in theatre and silent cinema orchestra pits, working in Cambridge, and Stoke-on-Trent. In 1922 while playing Hanley Royal Theatre, Stoke-on-Trent, in a production of the musical comedy Chu Chin Chow, Dick's eyes strayed away from the sheet music to a pretty usherette, Winifred. They were married in 1924.

Dick also worked on the White Star Liners (Hamburg-New York). On the transatlantic trips musicians could only go ashore for instrument repairs. Dick told the story that on one trip while ashore he saw a sign Bass Player Wanted, he went for the audition, got the job, then jumped back on ship! Later he could be seen playing at Fulham Lyons Pop Cafe, then with Charlie Tucker at The Empress Rooms, and at The Hotel Cecil with Marius B Winter, back to the Empress Rooms with Eddie Gross-Bart. Later there was a spell with 'Hutch' at the Embassy Club, played with Jack Shield's band, Howard Jacob's band, and was with Joe Orlando's band at the Embassy Club where Stanley Black was pianist and arranger (1). 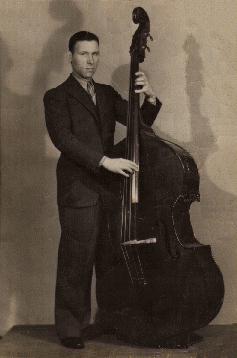 This photo shows Dick with the "Professor bass", one of three models made by Hawkes (later to become Boosey & Hawkes) in the early 1920s.
The earliest recordings listing Dick Ball-sb are a Homochord session involving Marius B Winter's Hotel Cecil Dance Band in Dec 1928 or Jan 1929. Dick may also be featured in later Winter recordings on Broadcast label from Sept 1930 - Apr 1931. Dick is listed as a member of Eddie Gross-Bart's band who had recorded but been rejected at several Decca sessions in 1930, and is on the numerous titles by the band released on Edison Bell in 1931. Some of the Arthur Lally/Lew Stone 1932 sessions on the Durium label featured Dick Ball as did a Howard Jacobs session in Sept 1933.

Then came the big time, with the Bert Ambrose Orchestra. Dick's first Ambrose record was 'Memories Of The May Fair' recorded Oct 5th, 1933, and Dick is featured continually up to 24 March 1937. It is said that during their Monte Carlo season the Bert Ambrose men would share a Ł2000 per week salary and lived superstar lifestyles, and a much told story tells that on one occasion when Ambrose ran out of money he sent Sam Browne back to England for more. On recordings from April 3rd 1937 Tiny Winters is listed as the Ambrose string bass player. Dick did return to Ambrose for a few months in 1941. See two Dick with Bert Ambrose photographs.

Max Bacon was Dick's good friend in the Ambrose band. See Friends' Autographs picture. There are many stories that could be told, like the time Max damaged his foot and Dick carried him up the stairs of the Palladium and the time Dick could smell something horrible on stage only to find somebody had stuffed a pair of kippers through the F hole of his bass! Harry Roy was also a friend of Dick's, and of course another great bass player since the 1930's Tiny Winters. See Dick and Tiny photograph. 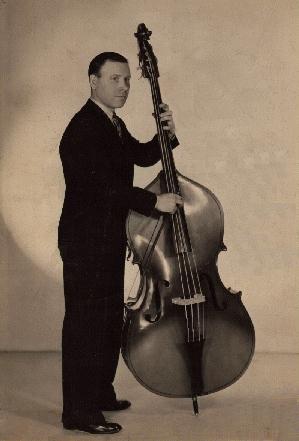 Dick worked with Jack Harris and his band for a few months 1937-38, and then spent two years with Maurice Winnick at the Dorchester and the Lyceum.

This is a photo of Dick Ball with a 3/4 size "king bass" which was of US origin. Apparently Dick heard this type of bass being used by the Dorsey Brothers Orch. and just had to have one. He had the kingbass imported to Britain and there was a photo in the Melody Maker of Dick personally picking it up from Southampton Docks.

You can hear the Embassy Rhythm Eight ensemble playing Hitchy Koo, then listen to the a jazzy break played by Max Bacon (dr), Dick Ball (sb) and Lew Davis (tb). We know Dick plays on many recordings but it's often difficult to pick him out for more than a few bars when there's support rhythm from the likes of Joe Brannelly (guitar), Bert Barnes (piano) and Max Bacon (drums), but I've included here an excerpt from the Lew Davis Trombone Trio recording of Three Of A Kind. R. Ball -bass is printed on the label of another record, Parlophone R2125, where Dick was a member of the rhythm support for two Lew Davis solo trombone recordings. Dick can be clearly heard on early recordings by Joe Daniels' Hot Shots including Steppin' Out To Swing.

In 1936 Dick kept up a family tradition by buying a newsagents shop (Westow St., Upper Norwood, London SE19) which his brother Louis ran when Dick was on the road. The shop was badly damaged by enemy bombs in 1942. This badly affected Dick and his son Cliff was of the opinion that the event prompted Dick to wind down his music career.

In 1943 Dick joined the War Reserve Police and served at Bootle, Liverpool, where he also played in the police band (see photo below). 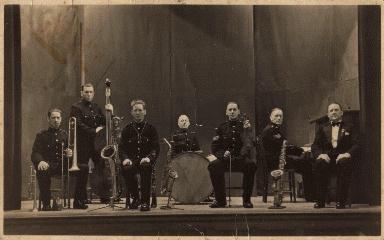 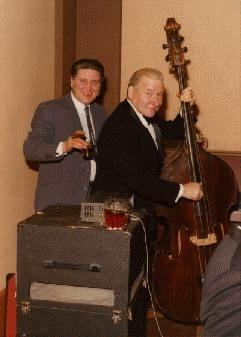 Dick continued with the newsagent business and on retirement in 1973 the business was taken over by his son-in-law Ian. Dick played bass at his own golden wedding in 1974 (see photo right) and the event was reported in a local newspaper.

Dick sadly died of cancer on the 5th Feb 1980. When Day Is Done was played at his funeral. His ashes are marked by a rose bush at West Norwood Crematorium in London.
Dick had four children, Jean, Cliff, June and Ann, and 16 grand children. Dick's youngest sister is still alive. The family hold many memorabilia from the Ambrose era. Dick's son Cliff, who passed away in October 2003 aged 77, was also a bass player and played with many names, including Oscar Rabin. Dick had discouraged Cliff from playing bass, wanting him to go into shopkeeping. Cliff secretly had music lessons from his sisters' piano teacher, and then taught himself to play bass. As well as Oscar Rabin, Cliff also played with Ronnie Scott, Stan Tracey, Kenny Graham. See photos of musical family. Of the grandchildren, William and Richard play semi-professional. Richard plays bass and in the 80s was quite busy on the jazz circuit in London, including a gig playing with Adelaide Hall. William, now in his 40s, has played drums since the age of 11, his father played cello and his brother Stanley Morrison was harpist with Sadlers Wells and the Bournemouth Symphony Orchestra. Another of Dick Ball's grandchildren, Jacky Dowd, has written to say that "My sister Melanie played double bass and Grandad went to see her play at Fairfield Halls in Croydon when she was still at school. I play piano and sing". (4)

There is an active discussion group where you can talk about Dick Ball and other musicians from the great British dance bands:

return to the Welcome Page