I have been contacted by Richard Carr, great-grandson of baritone singer Robert Carr. Together we are assembling what information we have into a story detailing the career of this talented artiste. At present these pages are a few family memories and some details from published discographies. With the help of other collectors we are building up more complete picture of Robert Carr's career.

Great-grandson Richard has supplied the photograph of Robert Carr, and has written: 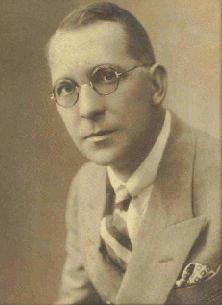 Born in 1881 the recording career of Robert Carr spanned from around 1904 to the late 1930's. As well as his own names many recordings were issued under pseudonyms, e.g. Robert Oswald, Harry Durrant, Robert Durrant, William Duncan, Richard Condor, Ernest Gray, Bobby Gray though those names sometimes concealed the identities of other singers. Some records by Bobby gray describe him as The Whispering Baritone. Richard Carr writes "among the records that I have collected are some of those that he made under the pseudonym of "Bobby Gray", on those he used a slightly different variation of his voice, describing himself as a "Whispering Baritone", among those records that I have are "A Little Bungalow" (composed by Irving Berlin)/"Jogging Along Behind The Old Grey Mare" (Regal label) and "Gentlemen Prefer Blondes"/"When the Red Red Robin" (Edison-Bell)". It has been thought that some records under Harry Trevor were by Robert Carr but Roy Openshaw has reported that Arthur Badrock has discovered documentary evidence, along with a photograph, which shows that Harry Trevor was a real person. Here is an clip of Robert Carr's voice from his recording of Beautiful Bird Sing On

John Wright has information from the late Bill White which suggests that Robert Carr was also concealed under other disguises: the name George Lacey on Tower label, Eric Lawrence on Imperial label, George Scott on Aco label, Arthur Vincent on Coliseum and Guardsman labels.

Under his own name a record was issued of Gounod's Nazareth on one side and Sullivan's Lost Chord on the other. Under the name Robert Oswald he made a recording of Asleep In The Deep for Regal. One recording, The Rosary was said to be the favourite record of the boxing champion Jack Johnson. The reason why he used so many different pseudonyms was because he had signed a contract with Edison-Bell in the early years of the 20th century. Shortly before the First World War a musical magazine (I don't know which one, unfortunately) held a survey of its readers to see who they thought had the best recording voice. The most popular turned out to be Robert Carr and second to him was no one less than the great Enrico Caruso!

John Wright adds: One record issued as by Ernest Gray is very well known among collectors, in fact most of us have a copy, it was a special record issued by Winner in memory of the sinking of the Titanic, and it was played a lot on radio and television when the Titanic movie was released in 1998. This is a small extract from one side entitled Be British

As well as being an active recording artist, Robert Carr also sang extensively in concerts and also participated in some operatic performances in his youth. He was also for a while the proprietor of a "Concert Party" called the "Georgians" which he later sold to the ticket agency company, Keith Prowse. His wife, Ruth Carr (nee Cash) had her own band called the Roma Castille (later Roma Carr) Gypsy Band.

In the 1930's Robert was a member of an octet retained by the Columbia Gramophone Company for some classical recordings, and also took part in a recording of Gilbert & Sullivan's "Yeomen of the Guard", "The Mikado" and also a recording of "Faust".

During the Second World War Robert Carr was active with E.N.S.A. which provided entertainment for British Servicemen.

In an attempt to build up a discography of Robert Carr there are two separate pages listing what we have so far.
Page 1 is a list of what I know of with additions from Richard Carr and visitors to this site.
Page 2 is a list compiled by Christian Zwarg and other collectors in Europe.
You can visit Christian's website on Acoustic 78's at Trusound
Dinosaur Discs are compiling a list of records they know about.

Additions to the Robert Carr lists would be most welcome. E-mail me if you have any additions.

There is an active discussion group where you can talk about Robert Carr and other singers with the great British dance bands: