Born into a musical family in Indiana, in his early jobs Danny Polo sat in the bands of the likes of Elmer Schoebel, Merrit Brunies and Ben Bernie. Later he spent time with Jean Goldkette and, playing clarinet and baritone sax, recorded some titles alongside Bix Beiderbecke. Polo spent a short time with Paul Ash before leaving for Europe. There he worked with Arthur Briggs and Lud Gluskin. 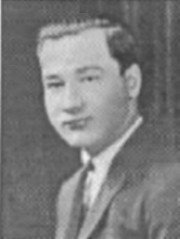 Then in 1929 he was in Britain and joined the great band of Bert Ambrose. Danny Polo made his recording debut with the band on an important date, May 31st 1929, when Ambrose cut his first four titles to be released on Decca, on the premier magenta-coloured label. You can notice Danny Polo's alto-sax right away on 'A Precious Little Thing called Love' and 'Mean To Me'. Danny had joined a superb band and was in the company of the likes of Sylvester Ahola, Arthur Lally, Joe Brannelly, Lew Stone and he was soon making records with some of them in the Zonophone studio band directed by John Firman.

Danny Polo was with Ambrose on and off for nine years. He played on many hot and swingy Ambrose titles during that time. For example here is beautifully controlled alto-sax solo work on Bench In The Park recorded with Ambrose on May 22,1930, issued on HMV B 5482.

While in England Polo was involved in many super jazz recordings including sessions with Spike Hughes, Arthur Lally/Philip Lewis, John Firman, Jay Wilbur, The Embassy Eight, Arthur Young, some Sid Phillips arrangements for the Ambrose Orchestra, and his own band Danny Polo and his Swing Stars. Here is an excerpt from Sid Phillips' composition B'Wanga. Danny played in the small Ambrose section The Embassy Eight and here is part of Danny's contribution to Where The Black-Eyed Susans Grow.

You can hear several Danny Polo recordings on my podcasts, check the playlists at http://www.r2ok.co.uk/playlists.htm

Returning to USA in 1939, Polo soon joined Joe Sullivan's band, and later Jack Teagarden's with whom he played on the soundtrack of 'Birth of the Blues'. He had his own band and worked with Claude Thornhill up until his untimely death in 1949.

Although Britain produced many fine reed players during the 30's, Danny Polo is generally regarded as the finest to have worked in Britain during the dance band days.

Robert Zieff reports : "The Miles Davis Nonet, which included french horn and tuba, had planned to recruit Danny Polo as clarinetist at a recording date, but Danny was not available. They had wanted Danny or no-one, so there was no clarinet. Ironically the nonet was heavily imitated - without clarinet ! Danny Polo was well regarded by modern players, and his work was praised by the likes of Lee Konitz and Gil Evans. Danny Polo covered a lot of change in music - all those years and never out of date".

There is an active discussion group where you can talk about Danny Polo and other musicians who worked with the great British dance bands: