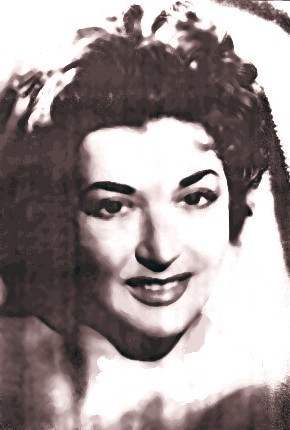 78 collectors may have seen several Harry Roy 78's crediting vocals to Jean Farrar. I can reveal now that her real name was Geraldine Farrar, and I'm very grateful to broadcaster and writer Ian Clayton for bringing the story of Geraldine Farrar to our attention. Ian knew Geraldine personally and published what was probably the only obituary to the fine singer, in the Pontefract & Castleford Express Aug 9th, 2001.

Ian has allowed me to reproduce the obituary in full.

The fine local singer Geraldine Farrar passed on recently. "Auntie Gerry" was very famous at one time and I would like to pay tribute.

I first came across Gerry in the Sun Inn, she was drinking gin and tonic, elbow on the bar, cigarette poised with ash about to fall. She looked like a film Star and spoke like somebody out of Brief Encounter in a fantastic dark brown voice. Later when I moved to North Featherstone, just round the corner from her bungalow, I would spend some happy hours drinking tea from her china cups and listening to her tell stories about her years in show-business.

Gerry was born to be a singer, she was named after a great American opera diva, who in the early years of the last century was in her pomp. Gerry's first taste of the business came when her father was secretary at "The Rat Trap" in Featherstone. She was fascinated by the turns she saw there, including a very young Ernie Wise, then a clog dancer in his father's act. She worked as a chocolate girl at the Premier cinema and in 1938 distinguished herself in a singing audition at Morecambe Pier.

She went on to a successful career in radio broadcasting, making over 100 broadcasts from Oxford Road, Manchester, and Portland Place in London. She sang with many of the great bandleaders of the time: Henry Hall, Harry Roy and finally the Sid Phillips Orchestra.

I once sat looking through her scrapbooks, they included fading pbotos of her in night clubs with Elizabeth Taylor. She launched into tales about looking after a very nervous Shirley Bassey at the Glasgow Empire and then she would wink as she remembered a champagne-soaked tale involving the Earl of somewhere or other at a night-spot on Old Bond Street.

She told me about the time she went to audition for the great Geraldo: "He took me on his knee, stroked my hair and said 'Dear sweet Geraldine, you'll get on, but I've got Dorothy Carless, come and see me another time.' I was a frightened girl in those days."

She had voice training at the Wigmore Hall and had learned breathing from Deanna Durbin, she didn't say "that" she said "thet".

The last time I saw Gerry I was with the twins. She was out feeding stray cats on Marks and Spencer chicken. "Don't you think it's about time you took the kids to elocution lessons Ian?"

"Why should I want to do that Gerry?"

She looked amazed in a theatrical sort of way and said, "Because darling, we don't want them to grow up talking like you" and she flounced into her kitchen. It was a very funny moment, a moment I shall cherish.

And I will never forget her voice. When we did a short feature for TV about her, she told me that she could still fetch tears to people's eyes when she sang tenderly. She was nearly 80 by then and in poor health, her voice was like a scorched newspaper, I doubted whether she could carry a tune in a bucket.

It was a lovely day and we were in the garden, the cameraman was humming Summertime, "fish are jumpin' and the cotton is high, your daddy's rich..." Gerry joined in, it was precious.

I shall look at the photo I was given by her that hangs near my staircase and I shall miss Geraldine Farrar.

An example of Jean Farrar singing with the Harry Roy band, Boa Noite, a song from the film That Night In Rio.

Terry Clark has provided some information on CD isssue of Geraldine Farrar recordings:

There are three recordings of her with Sid Phillips which have been re-issued on CD, and second-hand copies can be found listed on Amazon.

The Trouble with Love is Love (duet with Johnnie Eager) is on The Best of Sid Phillips, Empress RAJCD 918

Deed I Do (duet with Johnnie Eager) on Sid Phillips and his Band from Castle-Pulse (double CD) PDSCD 673 (song title is better known as "Do I Love You?, Do I?")

You can join the very active discussion group and talk about Geraldine Farrar and other singers: