One of the rarely mentioned British dance band trumpeters of the 1920's and 1930's was Bert Hargest who played trumpet with Sidney Firman's band and with Jack Padbury's band. I have been contacted by Doug and Lisa Sheehan. Doug wrote: "Bert Hargest was Lisa's grandfather. He died in Trinidad in the fifties not long after Lisa's dad was born. The family has a couple of publicity shots of the Firman band, but they're framed and mounted so it's not appropriate to get them scanned. I think Bert was still working as a musician in the thirties". 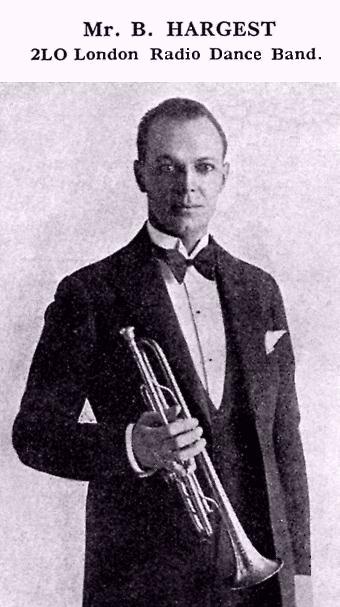 The name Bert Hargest is today only recognised by a handful of record collectors who have access to files on early popular music in Britain. We know something about Bert's recording career but not much about the man himself but very recently Bert's son and grandson have been piecing together some of Bert's life. Bert started with the cornet in the scouts and then with the Grenadier Guards during the First World War. He went on a tour of Empire and Allied countries in 1919-20 playing victory parades. He also played in a Quadrille band with his dad around this time.

It is thought that he met Jack Padbury in the mid 1920's and they had a residency at Cosmo's Club before joining the Sidney Firman Radio Dance Band that was formed in 1926. It was the first dance band created by the BBC for broadcasting on a regular basis. The band made a number of records for the Columbia company during 1926-28, under the name London Radio Dance Band.

I am grateful to Mike Thomas for supplying this photo of Bert from the Feb 1928 Melody Maker. Also thankful to Peter Wallace for additional information about the band, from his article in Memory Lane No. 85 (1990).

When the Sid Firman band first broadcast it consisted only of piano, drums, banjo, trombone, altosax, clarinet and violin. After a few weeks a tenor sax, a sousaphone and Bert Hargest on trumpet were added. Guest singers included Elsie Carlisle and Peter Bernard, and they also featured Eddie Sheldon and Sidney Nesbitt as vocalist. As well as their own evening broadcasts the band also provided music for radio revues and broadcast from the National Radio Exhibition at Olympia.

There were public performances including Cinematograph Garden Party (17 Jul 1926), and a ten week engagement at the Olympia Dance Hall.

I only know of one photo of the Sid Firman band, a publicity postcard from the BBC, with not a great shot of Bert as the trumpet hides the bottom half of his face! That photo, below, also appeared on some sheet music. The other trumpeter, further to the right, is Walter (Billy) Lyme who had earlier played with the Savoy Orpheans. 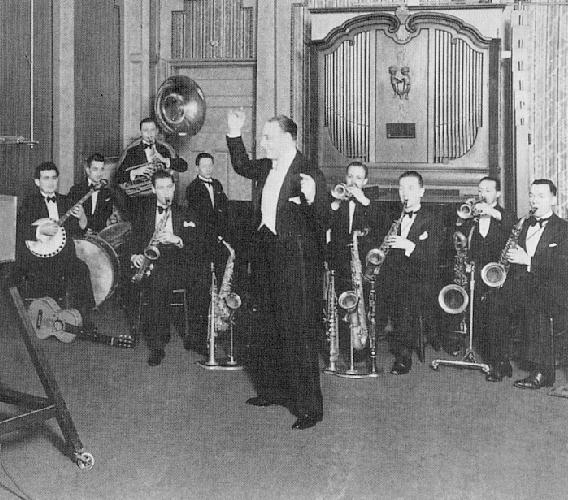 A second trumpet was added to the band in 1927 but I believe on recordings the lead trumpet heard is Bert Hargest. The only example I have of Sid Firman's band is a tape of The Devil Is Afraid Of Music and Bert can be clearly heard here. On the same recording Jack Padbury's clarinet playing is excellent.

Around March 1928 the leadership of the BBC band was briefly passed to the clarinet/sax player Jack Padbury before they were replaced by Jack Payne's band. Bert Hargest continued to play with Jack Padbury at Cosmo's Club where Jack Padbury's Cosmo Six also included Phil Silverstone (violin), Pasquale Troise (banjo) and Charlie Knapp (drums). The Cosmo Six made records for the Piccadily and Edison labels. Some of the Edisons are hot/jazzy and are particulary sought by collectors.

I don't know how long Bert Hargest carried on playing after 1930 (he worked in engineering later) but Jack Padbury's band toured British theaters and was featured in short films during the 1930's and Bert could have been with Jack during some of that time. Jack Padbury's band was featured in three short films, and I expect Bert Hargest appears on one or more of them. The song titles alone suggest these films are worth seeing/hearing:

It's particularly interesting to see that the band recorded Duke Ellington's It Don't Mean A Thing in 1933, the only other British band recording that title in 1933 was Jack Hylton who was involved with Duke's tour that year. Just A Little Jazz is probably not a published song title so this suggests the band performed arrangements of some as yet unidentified hot numbers. The title Sure Of Everything But You is not known to me.

I have two titles on Piccadilly 198 where the band supports the vocal efforts of Vivien Lambelet. She does not sing like a dance band vocalist, more like Gertrude Lawrence, but the band makes an effort to put some jazz into the recordings. Since Bert is the only trumpeter in the band he can be plainly heard, and was obviously a very competent player, as can Phil Silverstone on violin. Vivien Lambelet's style may not be to everyone's taste but if you listen to My Little Fella And Me you can hear Bert's accompaniment, and he holds a solo on I'd Rather Cry Over You.
Note from John Wright: listening to Bert's solo here, he sounds a bit uncomfortable on this occasion, like he is reading the music, not improvising. I'm sure there are better examples of Bert's jazz playing to be heard!

Note from Doug Sheehan: Lisa's dad, Ian Hargest, has an interesting card from 1926 showing a six piece band 'Sidney Firman and the Cosmo Band', with Cosmo struck out and BBC handwritten. This suggests that Firman, Padbury, Hargest and the others were together at the Cosmo BEFORE they formed the BBC band.

Note from Peter Wallace: This reference to the Cosmo is very interesting. According to the Radio Times, Sidney Firman's Cavour Restaurant Dance Band was billed as such until their broadcast of Saturday 16th January 1926. There were two further broadcasts by Sidney in January and two in February (prior to the London Radio Dance Band's debut on the 16th of that month) and these were billed as Sidney Firman's Dance Band. In that case, Sidney may have transferred to the Cosmo Club in mid to late January 1926 for a short engagement.

Below is a list of the Sidney Firman records and a list of some of the Jack Padbury records, from the Rust/Forbes discography, excluding rejected titles. I'd like to make a full listing of records featuring Bert Hargest so I'd be grateful if readers could add to the list with other Vivien Lambelet records and any others that Jack Padbury's Cosmo Six supported. I'd also like to know if any of these recordings have been re-isued on LP or CD.

Steve Walker reports that EBW 4915 is a dubbing of EBR 941.
(Note: I have been reading back issues of 'OK For Sound' and found that Steve Walker published some details of other Jack Padbury records. Excluding rejected titles, details are as follows:
EBE M-731 is an 8-inch Italian issue

Steve Walker also pointed out that two tangos were recorded without Bert Hargest.

There is an active discussion group where you can talk about Bert Hargest and other musicians who worked with the great British dance bands: