How can collecting 78rpm records be a fascinating hobby?

There are many collectors of 78 rpm records. A great many are into Vintage Jazz and Dance Band Records, and many also are keen on the early recordings of opera stars and of the music hall and ragtime era. Shellac has also preserved comedians, great pianists, violinists, poets, politicians, sporting heroes, historical events, in fact there's something for everyone revolving at 78rpm.

Readers and contributors to this website are primarily interested in the early jazz music, dance band music, and recordings by good vocalists of popular songs, especially those recorded or issued in the UK and USA from 1900-1945. Many such records were also made in Europe, Australia and South America. We want to get others interested, and get 78rpm records out of dusty second-hand shops and safely into home collections. You can learn about the music, about the records themselves, where to find them, where to sell them, how much they are worth...read on.

We want to preserve the early recordings of well known artistes such as Bing Crosby, Al Jolson, Al Bowlly, Louis Armstrong, Benny Goodman, Duke Ellington, Bix Beiderbecke, Billie Holiday, Gracie Fields ... and just as keen to collect the records of 20's and 30's dance bands like Savoy Orpheans, Ted Lewis and his Band, Paul Whiteman's Orchestra, Ambrose, Jack Hylton, The Rhythmic Eight, Brooklyn Broadcasters, and the many weird and wonderful names invented for bands.
Many people have contacted this website to say that a member of their family was a musician and made recordings during the 1920's or 30's. We're always delighted to hear from musicians' families, and will gladly assemble a free personal webpage on this site, this is how the pages on Nat Star, Richard Carr came to be!

Everybody likes some of the old songs, you hear them on TV, not so much on radio these days. Most of the jazz and dance bands of the 20's and 30's made excellent recordings of their own compositions and the standard tunes of the day. So if it's those quaint old songs you like then this is the hobby for you. It can be very satisfying to own original records of your favourite Irving Berlin songs, and you may find a lot of the old songs you like were written by Walter Donaldson ! We can help you find out who he was and what he wrote.

In the 1990's it became obvious that many of the older collectors were passing away, and in the 21st century new collectors will be needed to continue the job of preserving our rich musical past. I'm sure long-time collectors are reading this but I hope many other browsers are reading and thinking they could have an interest here.

GREAT BARGAINS TO BE FOUND!

Collecting 78rpm records is inexpensive, most junk shops and second-hand shops charge Ł1 or $1 per record, and if you're lucky you could get a boxful for Ł10 - suddenly you've got yourself a vintage collection !

Need something to play 78's on ? Well you might easily find a gramophone/phonograph. They have lasted very well and the portable types can be found for Ł30 or $50 in antique shops. The older horn-type gramophones can be very expensive. There are cabinet types for about Ł100 with lids which close and reduce the hiss from the steel needle, and they have doors which open and close for volume control!

A 1960's record player with a 78 stylus can be got for a lot less money, and they usually work when you get them home. And 78rpm record decks are still being made today by the specialists!

The common record labels are Columbia, Decca, Victor, His Master's Voice, but there were hundreds of smaller record companies. Some collectors find record labels so fascinating that they collect for the labels and never play the records!

Maybe you already have some old 78's and would like to know how old they are, find out about the labels and the recording companies,and who are those strange singers and bands featured on the label.

For example maybe you have a Paul Whiteman record on a black/dark blue Columbia label - then you've got a record nearly 70 years old !
Collectors like myself have books which can date Whiteman's recordings exactly. What's more we can tell you who's singing on the record, and it could be Bing Crosby, before he embarked on his solo and film career - that's just one of the surprises in store for the new collector of vintage records.

RARE ITEMS TO BE FOUND! 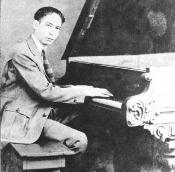 I've said that most 78rpm records can be bought real cheap, but as with most other old things there are some rare gems to be found. And you can learn to recognise the rare items through reading magazines, books and talking to other collectors, or write to this page ! There are many 78rpm record fairs held in the UK and USA and there you'll soon find out what records are worth a lot !

GREAT BOOKS TO BE READ!

No longer do collectors listen to their 78's with little clue as to the identity of musicians or vocalists. During the last 40 years the musicians attending most recording sessions in USA and UK during the 78rpm era have been identified. Most of the early jazz band soloists are readily recognisable but debate continues among collectors regarding identities on many obscure or rare recordings. Even this year there have been updates to the Al Bowlly discography and collectors continue to submit their contributions to the compilers preparing the next editions of Jazz Records and Dance Band Records discographies. Discographical research, dating records and identifying members of bands, began in the 1930's but much of the jazz and dance band research is due to the incredible efforts of Brian Rust who, for over 50 years, has sought out original recording ledgers and interviewed the old musicians and singers. Supported by collectors over the years Brian has continually updated and published his massive discographies.
Record collectors love music but they also love numbers, lists, dates and they spend hours just reading discographies and lists of recordings. Brian Rust's books are currently out of print and can be hard to find, but new digital editions of Jazz Records and American Dance Bands are available.

There are many other discographical publications and books on jazz and dance music are being published all the time. I have a recommended booklist on this website, and some of the books can be ordered today through Amazon.com

Interested ? Whether you are already a collector or would like to know more about finding and collecting vintage recordings, drop me a line. I can answer most beginners' questions, and if I can't I know someone who can !

E-mail your questions to me. 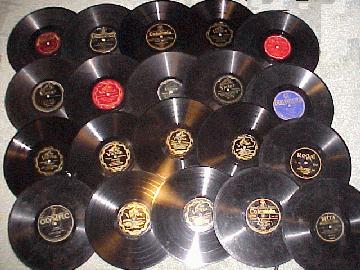 You can read About Me, how I got into 78 rpm records.

Return to my Welcome Page