I am making a start on a webpage as a tribute to Ben who can be heard on 100's of 78's of British dance band music. I have been contacted by Ben's family and we are currently exchanging information. Meanwhile, here is a list of bands that featured Ben Oakley with the approx. number of recordings with each (ref. Rust/Forbes British Dance Bands On Record 1911-1945 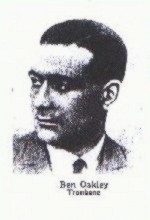 there were also many sessions with Harry Hudson 1927-31 (presence on particular records is not certain but Ben probably played on as many as 100 of Hudson's recordings (Edison Bell labels), it depended who was in the studio, sometimes the trombone player would be Ben Oakley or Lew Davis or Ted Heath).

Ben possibly worked with Fred Elizalde during a session April 1928.

Ben also worked in studio bands accompanying many artistes during 1928-1928, can't guess how many records but he did work with the likes of Elsie Carlisle, Beth Challis, Belle Dyson, Billy Elliott in 1928-29.

Rust/Forbes do not show Ben as having recorded with the Jack Jackson band but he could have worked with Jack at the Dorchester Hotel.

I would think it's likely Ben was involved in total on about 1000 records up to 1934, after that I don't think he did much recording with dance bands.

We are very short of band photos that may feature Ben Oakley. It's possible that the 'photo' above, from Dec 1930 Melody Maker may not be a good likeness when compared to other photos.

There is an active discussion group where you can talk about Ben Oakley and other musicians who worked with the great British dance bands: